I realized I had started a little late with putting my new sketchbook together for SDCC, but it still seemed as if there was enough time when I remembered how quickly they were turned around last year. Unfortunately I didn't count on the original printer going out of business (or so I was told) and the new printer having problems with weather and their equipment (I'm not sure what could've happened...did they have their equipment outside?)

Anyway, at this point it doesn't look very likely that the sketchbook being ready in time for ComicCon is a likely, but since I wasn't planning on setting up a table and selling them there I guess that's not a serious issue. I was hoping to have them available for Bud Plant to sell though, but I guess they'll have to sell them through their website instead and I'll also try to sell them from here as well. I'll let you know when they're available.

In the meanwhile here's a look at the cover (I hope...) 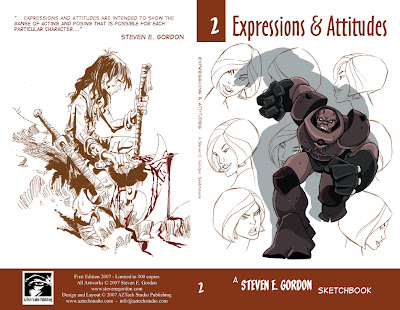 Despite not having anything to sell, my family and I will still be going to San Diego this coming week and wandering around the convention for awhile. I'll try to connect with as many friends and fans as possible, but anyone who has ever been to the SDCC knows just how difficult it is to locate anyone there - even those with tables or booths, but I'm hoping for the best.

Just a brief update: I'm still knee deep in work on Wolverine and the X-Men - all is going well and I'm positive fans will be thrilled when they see this new incarnation of the mutants - and I thought I'd clarify again that I am currently NOT working on any of the DTVs for Marvel/Lionsgate. My directing chores on Wolverine made it impossible to do what I felt was necessary to accomplish what they wanted. I assume sometime in the future that will probably change and I'll let you all know at that time.