Well, a lot has happened this last week or so .... and hopefully a lot more will happen soon as you'll read down below.

For the last month I'd been testing for the position of Character Designer on the latest Marvel/Lionsgate direct-to-video. Normally I abhor testing - mainly for the reason that I've never received any actual work for taking a test. And, even though they finally decided to pay me for the final test, my record remains in tact. True to form I didn't get this particular job and, needless to say, my plan for the future is to stick to my guns and never take that type of test again - especially if it's unpaid. I could go on and on about how I feel about these types of tests, but I won't bore you with that...especially when I have something much more positive to talk about.

I mentioned earlier that I had optioned a book with the hope that I could get it financed for a feature animated film.....well, for the last 3 months my producing partner and I have been going around to various studios and pitching the project. Most of the pitches have been going very good and all the reactions have been positive, but nothing concrete had developed - yet.
Now I'm not the best pitcher in town (quite an understatement), but this project comes in with such a big name - the author's - that it virtually pitches itself. I've had my friend, Francesco Francavilla, do some beautiful presentation drawings and I've put together a description of how I want to handle the film and this is what we go in with. We also go in with a positive attitude and view the studio as a partner in our endeavor and not the enemy.
The reason why I bring this particular aspect up is because a thread on a forum I frequent was started by someone who was proud of his antagonistic attitude towards those that he was pitching to. If you're curious about reading about it a friend of mine discusses it on his BLOG - just scroll down to the topic "More Nonsense". He pretty much states my opinion and he has a link to the original forum if you're that interested. (Stay a bit and check out the rest of his blog while you're there - he's putting together a really unique film and it's an interesting read).

Anyway back to the update: last week we had a pitch with a studio that went even better than expected - it seems we have the type of film that they've been looking to produce. In the parlance of the biz "it was a slam dunk". Hopefully in a short amount of time we should hear more and I'll keep everyone up to date as much as possible - without jinxing it too much that is. We also have other studios that we're still talking to just in case...you never know.
So you can see why I'm not too broken up about losing the character design gig. That was actually just to keep me busy and my hand drawing - especially since for my project I intend on hiring others to do the design work.
I'll show you this one piece by Francesco just to whett your appetites a bit, but I doubt anyone will be able to guess what it is.

Recently Boyd Kirkland gave me a CD full of art I did on X-Men:Evolution - it contained a lot of stuff I had some how lost before I was smart enough to back everything up. It had quite a few scenes of animation including scenes I'd animated of Kitty and Rogue dnacing from season 1 (our homage to Buffy) , some more dancing from "A Walk on the Wild Side" and a couple of walk cycles and even an FX test for Cyclops. All of which I've now added to the Animation section of my web-site.

Also a 'No-Prize' needs to be awarded to Blaze Rocket! Blaze Rocket's sharp eyes caught this image on The Ultimate Avengers DVD 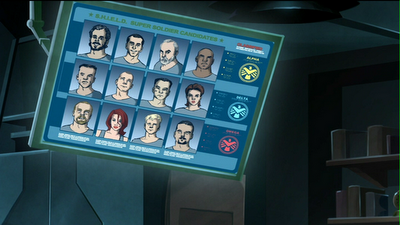 and correctly identified the Alpha Team member third from the left on the top row (though my hair isn't quite that white - yet). Besides yours truly the team also includes Curt Geda (top left) and several other UA crew members.

Speaking of which, I also had a little fun with some of the photos in Bucky's house. This one was based on my parent's wedding photo - though the photo of Bucky with President Truman was based on a photo I found on-line. 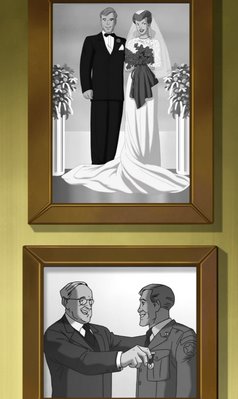