) discovered about a week ago. It seems that these two guys seem to be popping up in quite few children's books in various cameos and Scott tweeted about it.. Here's the iFanboy's coverage of what happened. So go ahead over there and read up on it and then come back. I'll wait......

....Okay, I assume you're back now. If you dig further you'll see this mystery has gained legs and has been picked up by quite a few other fan sites, blogs, Salon and Facebook (the Mystery Hipsters even have a FB page of their own). So, when I put up the Tweet for suggestions for Fan Request Friday last week I received quite a requests for these two guys and one even suggested I put them in Voltron uniforms. That seemed like a good idea and appropriate (I'll explain the Voltron connection in a bit).

When this week started my work load seemed to be lighter than usual and I planned on doing several more drawings, but not surprisingly the work load increased significantly by mid-week and  I ran out of time so my intent is still to finish these other drawings and to add them to the blog as soon as I can.

Now, what I was referring to before in regards to drawing the Mystery Hipsters in Voltron uniforms, is that for the last several months (and off and on prior to this) I've been working on a new series Voltron Force set to premiere on Nicktoons in June as the Supervising Director. The uniforms I chose for our hipster friends is not based on our new show, but based on the classic Voltron and they are not in the show (to my knowledge) so don't read too much into this drawing. 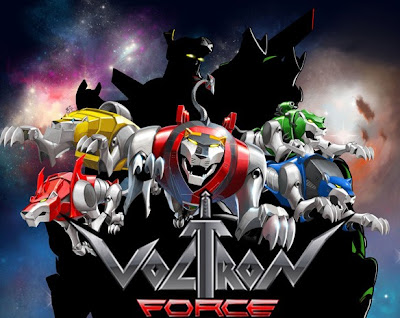 Madmen, Zombies, 2 Phantoms and BC

Seems like I'm always running late on posting my choices for Fan Request Friday. Every Monday I start out thinking to myself:  "Wow! Things are moving along nicely and I'm making great progress  - I should have no problem getting these done before midweek" Then Thursday rolls around and I'm knee deep in putting out fires and meeting deadlines that I didn't even know existed until Wednesday. So I find myself trying to squeeze in a drawing while I'm waiting for downloads and what not. As always, I had much bigger plans for these drawings then you see here, but I had to settle for what I could accomplish. All in all, I think they came out pretty nice and I hope you enjoy them.

The first is a classic character from the Golden Age of comics and that is enough to get me interested in giving it a shot - in case you couldn't tell I have quite a bit of affection for that time period: The Phantom Lady

The next is one I'd been working on for awhile and and was never satisfied with where it was going. I think I'm pretty happy now with the end results. The Ghost Who Walks - The Phantom

I'm not rely familiar with Mike Allred's Madman, but I always like the look of the character and when it was suggested I thought it was worth a try. But if you want to see some truly inspired work go over to Comictwart to see their Madman interpretations

The last is sort of a special case. A friend I met via Twitter, who is always very supportive, suggested his own character Z-Girl. She has an interesting look and thought it was an interesting challenge. So if you like this drawing (or even if you don't) go on over to his web-site to learn more about the character.

So now you know what most of the Title above means, but you're probably thinking to yourself: "BC? Who is BC?"
The "BC" isn't a character, but a place. I have to leave Monday morning for Vancouver, BC for a sound mix for the series I'm working on as Supervising Director. If you're sharp and follow me on Twitter you probably already know what show it is, but if you still have no idea then stay tuned to Nickelodeon Monday. I understand they're going to start promoting it pretty heavily for it's premiere in June. I'll be shocked if most fans don't like this show and what we've done with it and if it doesn't create a whole new generation of fans.
Posted by Unknown at 11:14 AM No comments:

Once again I'm running late on my choices for Fan Request Friday, but this time the reasons are more mechanical than organic.
I had been working pretty steadily on quite a few choices all week and thought it'd be nice to post them before Friday's next request went out.
Now that I'm working pretty exclusively at home for awhile I'd planned on getting a bigger, better computer, but I wanted to wait a few more weeks before I made that big of a purchase and I hate changing computers and having to reload all my software and programs and drivers, etc. - thankfully all my files are already on external drives so that's not an issue. But apparently computers have a mind of their own. I've spent the entire day Thursday screwing and fighting with Outlook and my computer in general.  I guess my current computer decided it wanted to push up that timeline if it could, so instead of getting ahead on work and FRF choices I just spent the day rebooting Outlook and my computer over and over.
Finally I've gotten it to the point where it's somewhat functional....somewhat...

Anyway, here are my choices for the last 2 weeks:

The first is Creeper. This is a character I've had little contact with even though he was created when I still read comics years ago. He never interested me that much just like Ditko's other attempts to catch lightning in a bottle for a second time. I thought I'd try to update his look a bit - or, at least, his hair style. Not sure it helped or not.

This one was an interesting challenge for me. I never liked most of the other versions of Balrog I've seen, from all the fanart to the Bakshi film to Jackson's version (though I will say Jackson's was probably the best). Not sure if this is any better, but I had some fun with it. If I have time I might take this to full color and that should improve it considerably

Popeye has been suggested several times and I wasn't sure how to approach it. I could do a straight cartoony version and keep him on model or I could go very staright and just make it look like a muscular guy in a sailor suit, but then I take the chance of making it seem as if I'm not capable of drawing in a cartoony style (that is an accusation that gets thrown at a lot of us action/adventure artists in animation quite a bit). So I thought I'd go with a hybrid and use my own sense of cartoony/straight . Not sure it works, but I had some fun with it.

And last, but not least is something I'd been playing with since frank died and finally decided to just finish the portion featuring Larn and Teegra. haven't drawn these characters since I finished work on the film and now I remember why I didn't animate that many scenes of Teegra.

Posted by Unknown at 6:47 AM No comments: