Step by Step, Slowly I Drew...

Awhile ago someone asked if I'd post a "step-by-step" on how I create the illustrations for the HarperCollins books that I draw. Since I haven't posted anything in awhile other than my Fan Request Friday selections I thought it was a good idea. Unfortunately due to my heavy schedule it's taken me a couple of weeks to actually get to it.

So here it goes.
Much like a comic, it all starts with the editors at HarperCollins sending me a script. They also send a pdf of the layout for the book that will usually include suggestions of what should appear on each page. Sometimes the suggestions are very specific and sometimes just ideas> I work witha  really good edito and his input is invaluable.

I then take a quick pass at some roughs. Being on model at this point is really necessary. I'm mnore concerned with layout and trying to get enough information onto the page as well as creating a good visual flow :

Then I get a set of notes based on that and sometimes a rough revision is necessary. In this case the revision was more of a PhotoShop fix than an actual re-draw:

Once that rough is approved I then put everything on model and go to final ink with any editorial corrections:

And once the inks are approved I then go to color  - or send it to my son for color (this partiucular book I did the color myself). First I lay down flat/base color. Unfortunately I no longer have the ffile where the BackGround was only flat color: 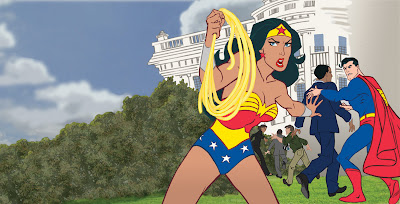 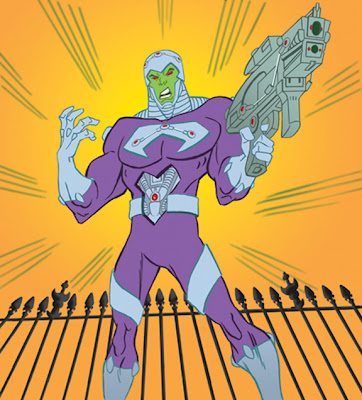 I then add shadows (and background details and texture): 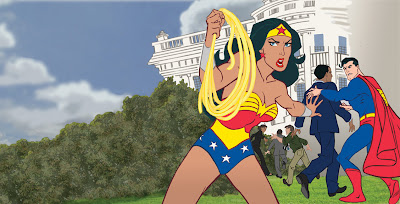 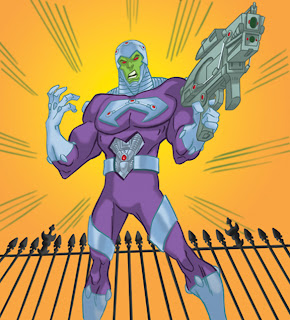 and from there I had highlights and any effects and tadah...it's finished (after final approval, of course);

I might post a couple more of these if I have time, but I hope this has answered a few questions - or raised some questions (like why do they give him the work and not me...)
Posted by Unknown at 7:00 AM 4 comments:

...to having all my current deadlines met, that is. And that is, of course, my excuse for not posting the step by step for my DC/HarperCollins illustration that I've been promising. Don't worry though -  I should have some breathing room this week to do it. In theory.

In the meantime here are the two Fan Request Friday suggestions that I decided to go with this weekend.
I, unlike many artists I know, haven't drawn Mike Mignola's Hellboy too often. In fact, this might be only the second time in about 5 or 6 years I've drawn thsi character. The first was when they were looking for a designer for the DTVs - and we all know how that worked out - and this is the second. I think this one came out a lot better than that first one...

This second picture was done as sort of a gift to a nice couple of ladies that enjoy Cosplaying quite a bit for one of their birthdays. But since it was suggested as a FRF I thought they wouldn't mind if I posted it here...

I'm actually running a little bit earlier than usual this week (though that might have more to do with the fact that I started a couple of these last week and never finished them...). And by early I mean before midnight...

This week I present the finished Attack of the Flying Monkeys  - though all that was suggested was Tin Man, Scarecrow and Lion. I decided to kick it up a little by including Dorothy, Toto and the flying monkeys...it's a little busy and if I had more time I'd rework it a bit, but overall I think it works.

The Oz piece and this next piece were both suggested multiple weeks, but that doesn't always guarnatee I'll choose them, but it probably doesn't hurt. I wasn't familiar with Pietro's daughter Luna and didn't even have any idea that he'd hooked up with Crystal. Shows you how bad a fanboy I am...
Though it did give me an excuse to try something a little sweeter...

This last one was sort of a dare. I'd seen some Sketchcards drawn by J. Scott Cambell fom the Indy movies and was really impressed with how well he'd captured Harrison Ford in them. A friend suggested I give it a shot as well  - even after I admitted to being terrible at capturing likenesses (as you can see from some of the other FanRequestFridays I did), but I decided to try anyway and figured if it didn't turn out okay I just wouldn't show anyone. But, at this point, I think it did turn out decent  - though I might change my mind a little later..

And don't worry I haven't forgotten about last week's promise to post a step by step on how I do my HarperCollins illustrations. I found the materials I wanted to use I just have to get around to posting them. Soon I promise!
Posted by Unknown at 7:13 PM 1 comment:

Darkness on the edge of the weekend...

With no serious deadlines pending (just wait till next week - oi vey) I spent a little more time than usual relaxing. In fact, I actually went to a movie. Not a very good one (Going the Distance), but, still, we went to a movie and that's something we don't do too often...

Anyway, this week I was doing a lot of reminiscing about my years on the Black Cauldron (since it's about to be re-released on DVD) and when someone suggested Darkness from Legend those horns were just too hard to resist.

There were several others that I started, but ran out of time on (I'm talking about you TinMan and Pietro) that I'll hopefully get to finish later, but I did decide to tackle my first ever Star Wars themed drawing. You'd think that after all these years I would've drawn even a Luke or a slave bikini Leia, but you'd be wrong.
So here is a female Tie fighter - not exactly canon (since she's female), but the uniform is pretty canon - I think....

And a special request GeekGirlDiva. She'll know what it means and maybe some of her friends will also...

I'm also planning a very special post that details (somewhat) how I create my DC heroes illustrations for HarperCollins so until then good-bye and L'shana Tovah to all the MOT!
Posted by Unknown at 11:06 PM No comments:

This week's choice for #FanRequestFriday is Race Bannon and Jezebel Jade from one of my favorite Hanna-Babara shows, Jonny Quest

. That show was unique in so many ways especially those great designs by the late, great Doug Wildey - not to mention it also had that great title music. If I have time this long weekend, I might try to squeeze out another. Several freelance deadlines are coming up fast so they have to get my full attention for awhile. I'm also working on a group shot that will take some time - not sure how long.
Well, I hope you all enjoy the 3 day Labor Day weekend and especially those of you at Dragon-Con