The Liberty Post...or the Washington Meadows...?

in honor of the great article about its creator Frank Cho

in the Washington Post magazine this week.
I've been a fan and have admired Frank for quite awhile and would love to be him when I grow up (except for the being really short thing - I don't think I could handle being any shorter than I already am at 5'8"). He's finally getting a lot of the recognition that he deserves (including a big art show in France) and it seemed like a good idea to finally take a swing at Brandy and some of her friends. If you want to see what they should really look like and see how funny they can be then click on the links attached to the names above and by some of the compilations.

I know I've said this before, but the variety of suggestions I get every Friday always leaves me wishing I had enough time to do more of these. For the last few weeks I've been doing several of the suggestions, but I'm going to have to return to the original plan of doing one every weekend because my freelance workload is nearing some deadlines. Of course, if it looks like I can reach those deadlines easier than I think I could return to multiples again.

Anyway, this week a couple of these have been requested several weeks in a row and one of them is a suggestion I've never seen before.
That 'never seen suggestion' is Christian Walker and Deena Pilgrim from Powers

by Brian Michael Bendis and Michael Avon Oeming. I've only read a couple of the TPBs, but I like what I've read. If you haven't read any of them you should check the book out.

The lovely Dr. Mrs. The Monarch (formally Dr. Girlfriend) from The Venture Bros

. has been suggested several weeks and by different people. I actually started this a couple of weeks ago, but ran out of time. So this week  here it is: 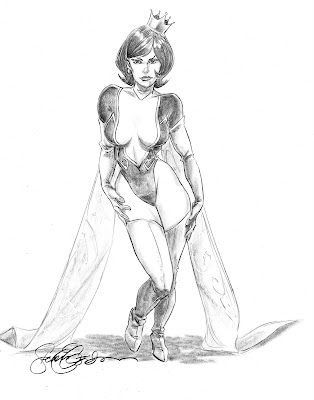 And since I've already drawn Buffy and Angel it seemed only fair to draw the current (mature) vampire hearththrobs. Sookie and Bill of True Blood

This weekend it seemed like I actually had some spare time - mainly because there were no immediate deadlines for other work looming - so when I started the drawings for Fan Request Friday I thought I'd have a little fun and see how many I could get done before the weekend was over. Obviously I misjudged my time and that's why I'm posting a little on the late side.

I even decided to wrap up a drawing I had started last week and never finished (the two Storms). Both of these specific Storms were requested by different people and I thought it would be interesting to combine them in one drawing. The old S&M version (as I refer to her) and the latest version.

I also tackled several requests that I was able to combine (Logan, Kitty, Rogue) and instead of doing the usual X-Men: Evolution version I decided to go with the Astonishing X-Men design - I don't think I've ever drawn these characters in any other looks than X-Men: Evolution or Wolverine and the X-Men so this was a fun way to explore something new and to satisfy several suggestions at once.

I also took the opportunity to draw a couple of characters I've never drawn before: Kilowog of the Green Lantern Corps and Red Monika from Battle Chasers.

Unfortunately I was so ambitious, I also started a couple of drawings that I found I'd not allowed enough time for and I'll try to finish later in the week or next weekend.
Posted by Unknown at 8:23 AM 6 comments:

I wasn't really happy with the faces on the latest Fan Request of Atom Eve and Invincible so when I finally got a moment I re-visited it and tought I'd give them a face lift. I think these look a little better....

Posted by Unknown at 6:49 AM No comments:

It never ceases to amaze me the diversity of suggestions that come in for Fan Request Friday. It always leaves me in a quandary as to which to do and I often start the weekend thinking that I should do a half dozen or more. Unfortunately by the time I actually start to do the drawings I find myself short on time. If only weekends were longer.

Many weeks it seems like I end up doing a female - oddly enough a majority of the suggestions tend towards female characters. I guess there's no real surprise there and it's not like I mind doing them either. So when He-Man was suggested I thought what character could be more male than He-Man, eh?
But, since I never really cared for the way Filmation had handled him, I thought I'd throw a little of a Frazetta vibe into him. It seemed like a good idea at the time, but I'm not quite sure it works for the character after all.

Before I ran out of time and had to get back to work I was also able to squeeze one more in. Invincible and Atom Eve have been suggested many times over the last few months and though I'm not very familiar with them I've always have liked their designs and the way Cory Walker and Ryan Ottley have drawn them - so I wanted to take a crack at them.

To draw a Mockingbird...

This weeks choice for Fan Request Friday was chosen because I used a Cos-player's pose to help out with last week's pic (Danger Girl) so it seemed I sort of owed her one. I hope she likes it though I'm not sure my Mockingbird comes off as well as her Mockingbird.
Up until recently I'd never even heard of this particular character and then a couple of months ago I learned about this Shield agent and then when I came into contact with Jen Richards (aka Mockingnerd) via twitter and FB it seemed to be a character that was forcing herself on me in a way. So I very well might have chosen to draw her regardless of my feeling like I owed Jen one or not.

But I don't want it to appear that I'm playing favorites so I also decided to draw a request that seems to have been mentioned almost every week since I've started this. I'm not sure I've done Angel and Buffy justice, but it's not too far off. Maybe I'll revisit them again later and give it another shot.
I was kind of late to the Buffy/Joss Whedon appreciation society and only started watching Buffy once I started working on XME at the suggestion of the producer, Boyd Kirkland, since that was sort of the model he wanted to base our show on - or at least try to. I started watching after the whole Buffy and Angel storyline had basically played itself out and just revisited those episodes in re-runs and after they were released onto DVD.
In fact the show and the characters made such an impact on me that many of the XME characters were somewhat modeled after several of the actors on Buffy. Jean/Charisma Carpenter, Kitty/Alyson Hannigan and Kurt/ Seth Green.