Season of the Witch...

...though Elvira says she's not a witch and I guess we'll just have to take her word for it. She seemed an appropriate suggestion considering what night this is...though Halloween is almost over. I have to really hand it to Cassandra Peterson for being able to take what was a silly little gig and make so much more of it and making it a lifelong career.

I also have to hand it to Neil Patrick Harris for not just ressurecting his career as an adult, but actually becoming a much bigger star now than he ever was when he was playing Doogie Howser, MD.

For those of you who don't recognize the Iron Maiden it would be well worth your time to do a little research into her history and the period when Wally Wood created the Thunder Agents. The Thunder Agents were some of the first comics I read as a young kid that I looked at in awe at such fantastic draftsmanship. Draftsmanship that I still look at in awe.
I find this odd, but this is the second time that PhotoBucket has decided that an image of mine was unsuitable for viewing. And the very strange thing is there is absolutely nothing racey about it that I can discern...or am I nuts? So I just uploaded it directly. The old fashoined way. 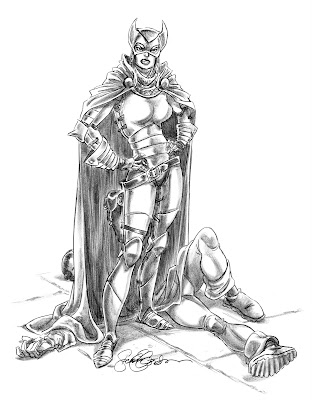 I hope you like this week's Fan Request Friday drawings. I have a couple of other cool projects that were suggested and will hopefully get through them before the week is out. So stay tuned...
Posted by Unknown at 10:29 PM 1 comment:

...I had planned on doing two of these last week, but ran out of time so I decided to finish them this weekend. It also helped that one of them was suggested again this week.
To be absolutely honest someone suggested I draw Stephen Colbert, but I decided to draw his comic/animated personna Tek Jansen. The Cobert suggestion seemed to make sense to honor his March to Keep Fear Alive rally (which has since combined with Jon Stewart's Rally to Restore Sanity. Consider it my little contribution to restore sanity - or keep fear alive.

Nightcrawler drawn as a pirate seems to be a popular suggestion and it appears to have some comic context though I must have missed that particular run of comics.

And I also missed the entire on and off comic career of Cloak and Dagger. I've seen some images of them, but have no knowledge of their history other than what I just read on Wikipedia.

Posted by Unknown at 7:06 PM No comments:

When I woke up this morning I had fully intended to do several pictures for Fan Request Friday. I even picked for out and roughed them out, but as the day wore on and other things came up. Time started to get away from me and I only had time for this one before I needed to dive back into the freelance. I'm hoping that throughout the week I'll be able to find time to finish the other three and post them.
The good news about one of the activities that I was involved with today is that I found an entire unopened box of my first sketchbook -Expressions & Attitudes 1. I thought I had virtually sold out of these and had even removed the link from the side of this page to purchase it. I'll have to add that later when I have a few minutes, but in the meantime if you want it just use the link for my second sketchbook and include on the PayPal instructions to let me know you want sketchbook 1.


Anyway, this weeks choice is Vampirella. It seemed appropriate with Halloween coming up...

When I was young the Planet of the Apes series was one of my favorite reasons to go to the movies (yes, I'm that old) and it wasn't until much later that I realized that only the first movie was really any good. I'm sure the fact that it was written by Rod Serling probably had something to do with that and Charlton Heston's over the top, stilted acting was actually acceptable (not something you could always say about his acting - Moses? Really?)
Taylor and Nova have been suggested every week since the time I started the Fan Request Fridays by a friend so I thought it was time to reward his persistence. I'm not sure I completely succeeded in capturing Heston or Linda Harrison but I damn well nailed the rifle.

Can you see the Thundarr...

Thundarr and Ookla have been suggested several times so it seemed like it was finally time. I thought I'd toss in Ariel just to make sure I was covering all the fan bases.
Thundarr the Barbarian was a show I was only sort of aware of and that was mainly due to Jack Kirby's involvement. In fact I don't think I ever saw a single episode. Maybe one of these days when I have some free time I'll give it a look...free time? Who am I kidding...?