Which Cap is best?

There's kind of a fun little debate going on over at The Marvel Forum discussing which of my two Captain America designs is better. The more traditional one I created for X-Men: Evolution or the one based on Brian Hitch's design for The Ultimate Avengers direct-to-video DVD. Buy it here.

What is also kind of interesting (at least to me) is that the design I did for X-M:E, while being discussed as the traditional Captain America was originally planned to be closer in thought to Hitch's in the Ultimate's comic. Keep in mind that the Ultimates hadn't hit the comic stores at this point. My original plan was to design Cap in a somewhat more realistic fashion and less like a comic super-hero. In my original roughs I had removed the wings from his head and even the "A" from his forehead and added a Sam-Brown type of gunbelt and removed the rollover from his boots. My producer, Boyd Kirkland, thought this was too big of a departure for the audience (and for him too) and I ended up keeping the wings, the "A" and the typical Cap boots. The only real modifications that I made was to give him the belt (minus the gun, of course) and change his sleeves to be more reminiscent of Wolverine's. I did this last change to give a visual continuity to the Weapon X program. In no way am I suggesting I went as realistic as Hitch ultimately did, but I definitely was thinking in that direction. I guess that's one of the reasons the Ultimates comic really caught my attention when it came out. You can buy the comic here.

Not that anyone asked, but if they did, my personal favorite is this one - also based on Hitch's design - of a realistic Cap during WWII. 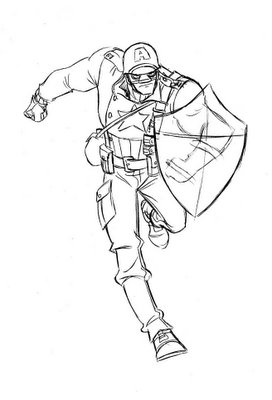 I like the original version of Cap best. While I appreciate Bryan Hitch's redesigns (of which I certainly like the WW2 version best), NOTHING compares to the classic red, white, and blue chainmail uniform with the wings on the head. And MOST CERTAINLY NOT the latest version in the comics with the overdrawn scales. ICK. BTW, nice drawing, Steven.

Dunno what to say, i still have the same "High energy" emotion when i see the original capitain america springing on tv and i really doubt any other version could bring out that same feeling. Maybe its the history of that costume, maybe its the colors/how fantasy was crossed with a realistic situation, but each time he came on the screen in either a cross over or his own serie, it really casts this feeling that, Capt America is here hope is here again.

(Yeah its hard to actually type what i want to express here, forgive the typos.)

Thanks, guys, I can definitely see where you're coming from and I feel the same thing about the original Cap. I guess it's just my 'jadedness' that gets excited about Hitch's re-imagined version. It might also have something to do with having seen how bad his original outfit looked in that God-awful live-action film awhile back.