While wandering the web a bit I noticed that there were some who were trying to read between the lines of my previous post....so I did a tiny edit of my last post to, hopefully, eliminate anyone from drawing erroneous conclusions from what was meant to be a positive reaction to the Ultimates screening I attended. I have to learn to be more careful.
Posted by Unknown at 1:48 PM No comments:

Well, once again I've been negligent in posting (maybe I should stop apologizing for that and just except it as a fact of life), but I've been busy in editing with the Stan Lee Presents...The Condor DTV. It's actually quite fun to be able to sit with an editor in front of an AVID. There are scenes that I've slowed down parts, sped up other parts and added pauses or removed pauses - I almost feel like I'm actually animating again.
And when I'm not at work I'm at home working on those children's books. These have turned into a nice little side project and I've enlisted a good friend to do backgrounds for them and my son to paint them. I'm very pleased with how they're coming out and it sounds like I'll be doing some more in the future. These are movie adaptations and I'll let you guess what unreleased films I'm working on the children's books for. I hope more than just kids are interested in buying them...

The big news, since I last posted, is that I went to the Ultimate Avengers screening Saturday night. Without giving too much away I can definitely say that the fans will be very saitisfied. It definitely achieves a much higher quality level of animation and storytelling than either X-Men:TAS or Spider-Man:TAS and equal or better in many ways to X-M:E too (and you know how high a regard I hold that show). One of the things I most feared was whether or not the overseas studio would be able to handle my character designs - I breathed a huge sigh of relief. While I might quibble about certain specifics I think overall they captured the feel of what I designed. 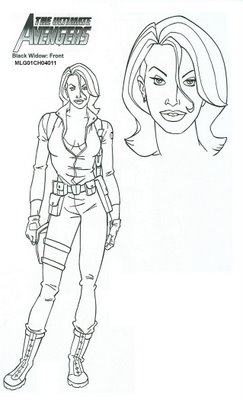 Re-takes, line-art, an invite and a trip

Whoa...it's been a really busy couple of weeks. I've been calling re-takes on the The Condor DTV and I'm just about done. I only have six more sequences to go and then I can continue working on the titles and start spotting the music with the composer. Since the overseas studio is starting on re-takes and they're in the middle of animating the second show it seemed like a good time for me to visit their studio in japan. that should happen in a week or so. It should be interesting - I've never been to Japan before.
I'm also finishing work on all the line-art for the children's books I'm doing for HarperCollins. I'll give you more info on these as time goes on, but I'm pretty sure anyone checking this blog will like these.
Yesterday I received an invitation to a screening for the Ultimate Avengers DTV that I co-directed (with Curt Geda) and designed all the characters for. I'm looking forward to seeing how this finally came out. Here's a truncated version of the invitation - I removed all the pertinent info to avoid too many fans from showing up...this basic image has been posted on the net before so I don't think I'm violating any secrets. 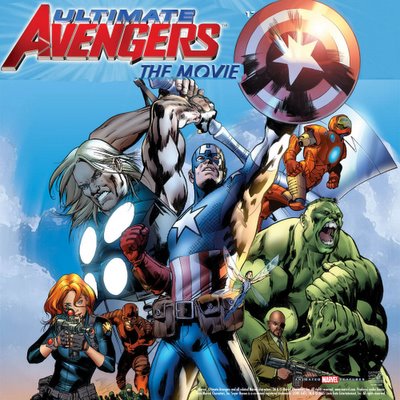 This drawing is kind of cool, actually. It's a drawing by Bryan Hitch of characters I designed based on characters he designed. Of course, Cap, Wasp, Giant Man Hulk and Fury are all virtually identical to his designs - though I'm sure he could tell you the differences. Widow and Iron man (and Thor for one obvious reason)are my original designs - sort of based on his, but more base on his thinking more than how he actually drew them in his books.
Posted by Unknown at 7:26 AM 3 comments: