In my last I answered a question that really threw me. It was the one concerning all the Gay fan pairings of characters. My answer seems to have caused a little stir over on the Marvel Forum so I felt I had better clarify my answer a little before it gets misuderstood futher.
I said we felt Kurt might be Gay. That doesn't mean we ever played him as Gay or implied in anyway he was Gay. To be honest I doubt everyone thought this way - but I know I did. As to his incarnation as a priest in the comics we had no interest in using that aspect of him whatsoever - as far as I knew.
The other concern was a flip comment I made about Risty and Rogue. This is where the clarification really comes into it. Mystique was Gay so that would make Risty Gay - we even had some fun with using purple as her main color and her earring, but it was all subtle enough not to be claear to anyone too young or not in the know. Did it appear a Gay character was hitting on Rogue? Yes. But was Risty/Mystique actually hitting on Rogue? No. She behaved as many mothers might behave, but when those concerns are translated into those of a same-sex peer it can appear as if there is more to it than that. Especially since we were able to keep Risty's secret for so long. My comment about a possible weird relationship between Risty and Rogue was probably a mistake. It was a joke and probably not a very good one...oh, well. 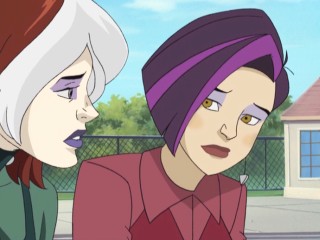 Next time I'll bee more careful with any jokes - I've got a very dry sense of humor that my wife tells me isn't always clear to others... ;)
Posted by Unknown at 9:44 AM 14 comments:

A young lady, Blaze Rocket, sent me a few questions and instead of just e-mailing her back the answers I thought I would post them here. I hope she doesn't mind, but this way I've got fodder for a new post too....


BR: Will there ever be a "How to Draw" for any Brotherhood members? I`d love to see Wanda or Pietro, and I know plenty who would be interested in one on Toad. Freddy would be a good one, as drawing "larger than life" characters isn`t something that most people get instruction on. A drawing tutorial for Mystique that simply said "see all above" would make me giggle. Oh! And the Professor! Wheel chairs are hard! That`s my personal reasoning as to why the she`ar hover chair come into existence. Somewhere along the line, someone said "Screw wheels. I`m giving him a hover chair."

SG: The "how to" pages that were put up on my web-site weren't created specifically for this web-site, but were created for the show for the overseas studios to use. Due to the limited amount of time that I had at that time - between creating new models for every show and directing a third of the season's shows gave me very precious little free time. So I usually only made these construction sheets for characters we were very concerned about going way off model. The main good guys. I know that may not seem fair to all you fans of the brotherhood and other bad guys, but we had to make a call as to where to focus my energies. Though on the bright side I am adding a Blob walk cycle pretty soon to the animation section - hopefully that will satisfy you somewhat.

I also hate drawing wheel chairs and other props like that, but unfortunately we felt that it was better for the show for him to be in a more standard wheel chair than the hoover-type chair. I did cheat a little though and based it on the one used in the movies.

In interviews, it`s been stated that the new recruits got the short end of the stick, as it were, in that when an episode needed "tightening," their "B" stories were the first to be cut. Will any of these "B" stories ever be shared with the fans of the show?

When a script is being created often things are cut and added to make the script better for a variety of reasons. I doubt any of these B stories will ever re-surface - mainly because I doubt anyone could remember them.

In the "future vision" Professor X gets at the end of season four, were these teasers actually based on stories that the Evo team wanted to do, or perhaps had plans to do and weren`t able to... Or were they just teasers, perhaps a nod to those fans who also enjoy the comics?

To my knowledge the next season's shows had never been seriously discussed (this usually only happened after the next season was green lighted) and these visions were created as just a way to wrap up the series for the fans - and ourselves.

If, miracle of miracles, Evo was revived and renewed for another season (or four, so long as we`re dreaming), would you and the rest of the creative team return to work on it?

Anything is possible...but I seriously do not believe there is any chance of the show coming back after being cancelled so ong ago at this point. Unless DVD sales are huge (like Family Guy) I wouldn't hold my breath.

Between DVD extras, in-show statements, and statements made on former WB web-pages, there`s some confusion as to the proper ages of characters. How old, exactly, were the characters of Evo supposed to be? Minus Logan, as that would just be cruel.

We never determined specific ages other than the obvious ones. Kitty was young enough to just be learning to drive in season 2 (if I'm remembering right) and Scott and Jean were seniors. Most of the characters were discussed in more general terms. Like so-and-so was in their 30's or so-and-so is younger than Kurt, etc.

Realizing and taking into consideration that Evo was a kids show, was there ever any sort of family back story or time line developed for the Maximoffs and their daddy? Specifically...
The last name "Maximoff" seems to indicate that at some point, Django and/or Marya Maximoff were involved. Were they?

If there was any discussion then I never heard it or was involved.

A DVD extra states that Pietro is an Eastern European exchange student. Any truth to that?

That's news to me.

Storm says that Pietro and Evan have been competing since they were babies. Is that a literal statement or figurative?

That's also news to me.

Magneto looks to be about 12 when he is rescued by Captain America and Logan. How old then, would he have been when Pietro and Wanda came about?

What happend to Magda, the Maximoff mother? Was Anya ever considered? What about Polaris?

These things were also never discussed to my knowledge.

How old were Pietro and Wanda when Wanda was institutionalized?
Who`s older- Pietro or Wanda?

Do you have a favourite character in Evo? A favourite to draw?

As I've mentioned before my favorite characters were Rogue, BoomBoom and Wanda. Mainly because I think the new concepts we created for them were so unique and different then the comics. My favorite to draw would probably be the easiest to draw...Wolverine, Nightcrawler and Todd.

You`re obviously aware of Evo`s on-line fandom. What are your thoughts on the homosexual parings that crop up- usually Lance/Pietro, Amara/Tabby and Kurt/Todd?

No, actually I wasn't aware....and I'm not sure I want to explore those ideas too far. As far as who was Gay or not we subtlely tried to indicate that Mystique was living at one time with Destiny and raising a child (Rogue). We also tried to indicate that Risty was Gay (Mystique in disguise) and she was flirting with Rogue - which actually leads to a very weird situation on it's own merit. Some of us also kind of felt Kurt might be Gay, but that was never addressed in any way on the show.

What are your thoughts on such things as fan sights, fan fiction, fan art, and fan flicks?

I think they're all good fun and help to keep the shows alive. At first I was a little shocked at the amount of them, but it did help us understand what type of impact we were actually making on the fans. I'm sorry to see some of them disappearing - but I guess it was bound to happen since the show has been off the air for some time now.

What advice would you give to an aspiring animator?
What was your education like?

Things have changed quite a bit since I started in the business, but I would suggest that anyone interested in the industry should learn CG, as well as drawing and to learn other aspects of the business like storyboarding. And study film - not just animation.

My education was mostly on the job. Though in retrospect i wish i had gone to school once you start earning money it's very dificult to take time out to go back to school.

So...all the questions are answered --somewhat and I've added another post. Not a bad morning all in all...

I just wanted to post something quick for those of you who have ordered sketchbooks and posters...I just wanted to let you all know that they will be coming, but I've been extremely busy with deadlines and now I'm going out of town for a few days. Just be patient and I'll guarantee you that they will show up at your homes soon. Just hang in there.

In the meanwhile, here's another sketch I was commissioned to do back in San Diego. 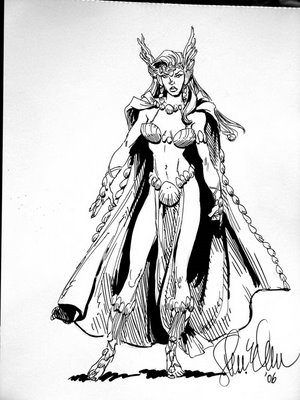 It's Jean Grey dressed as a queen of the sea - or something. I swear this is actually from a comic. I think it was Byrne arc. The guy had reference for me to use....
Posted by Unknown at 6:03 PM 13 comments: 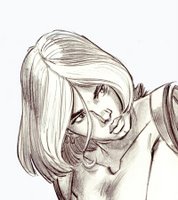 Sorry if it seemed to take a long time, but I finally came to the decision to make the SDCC poster of Rogue available for the same price I was selling it for at the convention - $10. BUT that will only be for the continental US. If you want it shipped elsewhere it will probably be more a little more and we can discuss it on a case by case situation.
If you want one just pay via PayPal to my e-mail address: steve@stevenegordon.com and make sure you indicate that you're paying for the poster.
Posted by Unknown at 6:28 AM 18 comments: