I was having a discussion with someone on my "art of..." page on FaceBook about the different face and body types I designed for the ladies of X-Men: Evolution and I thought I would share it here as well.

The obvious reason I designed different body and face types was to help try and create specific personalities for each of them. Though if you're familiar with animation (and comics) you know that's not really necessary since so many other animated shows create cookie cutter faces and body types and just change voices, hair color and costumes to differentiate one character from another. The other reason is because I was inspired early on in the process.

Boyd Kirkland showed me a lot of artwork he admired from comic artists to try and get the ball rolling. Comic artists I was unfamiliar with since I hadn't really looked at comics much since the glory days of Buscema, Kane, Kirby and others from that era. The art he showed me had one particular piece of art by Adam Hughes (who since then I've become quite enamored with). It was this piece he created for Wizard magazine of these super heroines ladies all lined up. 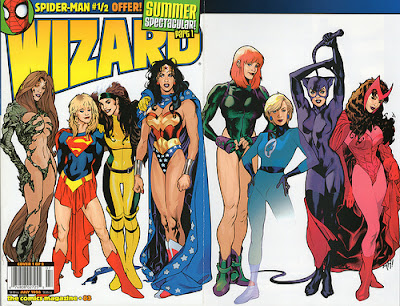 Every one of them had a unique face - and a face I'd never seen before in comics or animation. Even though I greatly admired the great artistic abilities of the legends Buscema, Kane, and Kirby, I recognized that for the most part each of these great artists had an idealized version of a woman they drew and all their women were all basically cookie cutter designs. 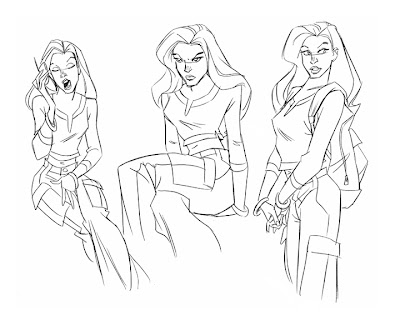 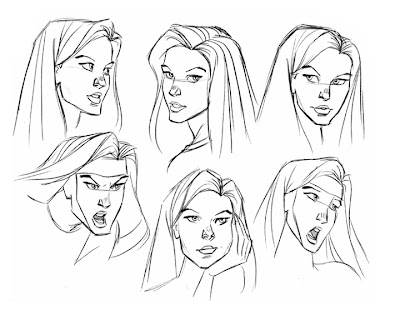 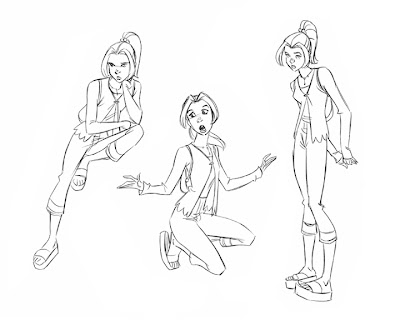 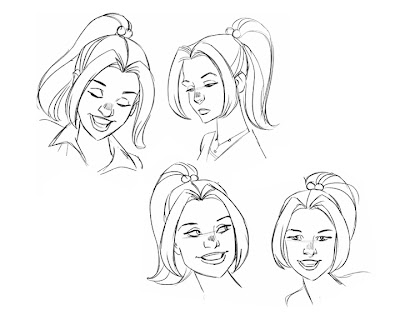 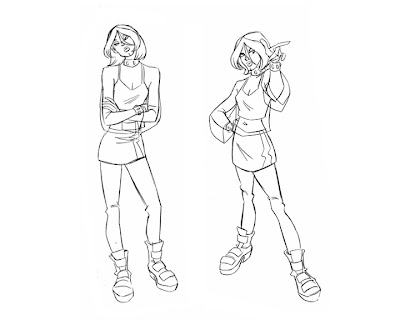 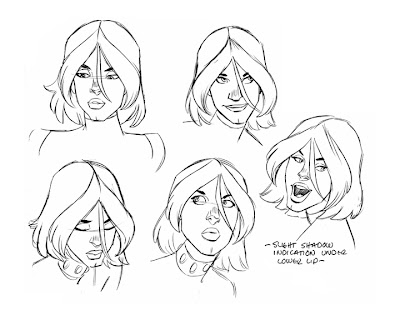 This carried on into the second season when we introduced Boom Boom and the other new recruits. 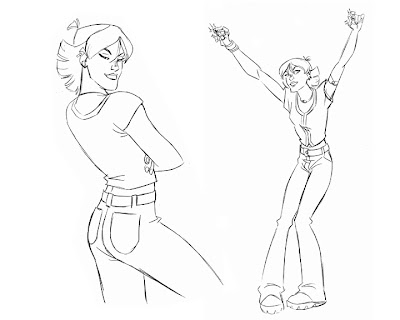 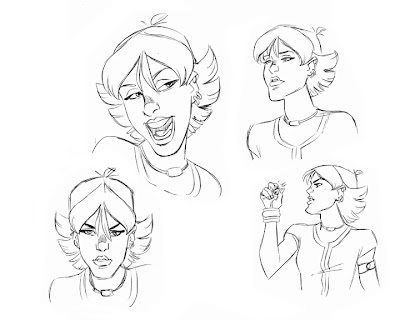 Jean was more athletic and had a runner's figure and wasn't very large on top while Rogue didn't have much of a butt even though she was very busty ( in fact she was the bustiest of the girls). Kitty was very slender and somewhat gawky while BoomBoom had a more curvaceous bottom though her bust was pretty non-existent.
The details on their faces that made them different from one another are too many to really list, but I will say that almost all of them had different head shapes, types of lips and often different eyes and noses.


I also carried this through with the guys as well, but that's not quite as unusual in animation  - or even comics.
This idea also followed through when I designed attitude poses for each character and their walk cycles. No one was ever posed or moved the same way. They were all unique and kept in character as i perceived it.

Needles to say the KidsWB execs were happy to see that not every female was built like a Playboy bunny.
Of course, by the time the animation came back from overseas some of that was lost, but I think enough of it still came through that it was clear to most of the audience we had tried to do something a little different....
Posted by Unknown at 10:09 AM 33 comments:

Well, here I am blogging again - and it's only been a (relatively) short time since my last blog. Who'da thunk it, eh? I figured this time I'd give you a little of this and a little of that...
Last night was the Animation Guild holiday party so I guess the holiday season is officially over now. I believe they have the party so late after the real holidays so that they can get a good deal on a venue (the Gene Autry Museum near the LA Zoo) and since they're spending union dues they have my blessing on that. It was good to see old friends, meet some new people and just to be amazed at how big the animation community has grown. I recall union parties that were held in rooms no bigger than my living room without any crowding. Last night the upstairs and downstairs foyers of the museum were so crowded with people that several strangers probably left on more intimate terms than they arrived.

Just some small updates since last time.
I'm still working on new sketchbooks, etc I have a lot of more material then I originally thought so I'll have to weed through the folders and decide what works and what doesn't - and try to avoid too much overlap (not always easy) accept for the compilation book of the two Expressions & Attitudes books, of course.
Still working on development of the Captain Action series (did I mention that before...?) and that's coming along very nicely. If you want to see the teaser we created for last year's San Diego Comic-Con you can check it out here. We've come considerably farther than that, but I still like to watch this occasionally for inspiration...

The next season of NFL Rush Zone (that's the current show that I'm one of the directors on  - as well as part-time designer) is starting up soon and I'm going to spend some time working up some walk cycles and other types of stuff that there never seems to be enough time for in the chaos of a first season. Even though our first season was technically the second season since the real first season were webisodes that were put up on the internet.

I'm still working on those graphic novels for Sequential Pulp/Dark Horse Comics and the announcement about the secret project that I spoke of last time should be pretty soon. Here's another sample drawing I did with that in mind: 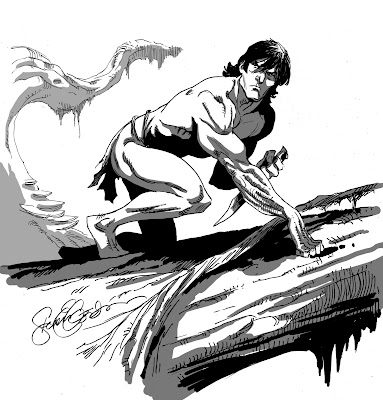 I've also started to do some work on some pages for a noir/crime comic for my friends at House of Secrets. They're the guys that put together my latest sketchbook (which is available at Stuart Ng Books and at CTN's Store  as well as at House of Secrets.Come on, you knew I was going to plug that somewhere, right?)

I'm also currently working on a couple of new HarperCollins books. One features the JLA fighting Starro and another features the Green Lantern - not the film version, but the comic version. A Man of Steel adaptation that my son is working on the color for should also be coming out at the same time as the film hits theaters.

One last thing for now...someone asked for a specific page from one of my HarperCollins books that they could use for a wallpaper that they couldn't find on-line. So I thought I'd post it here (I'm quite the giver)... 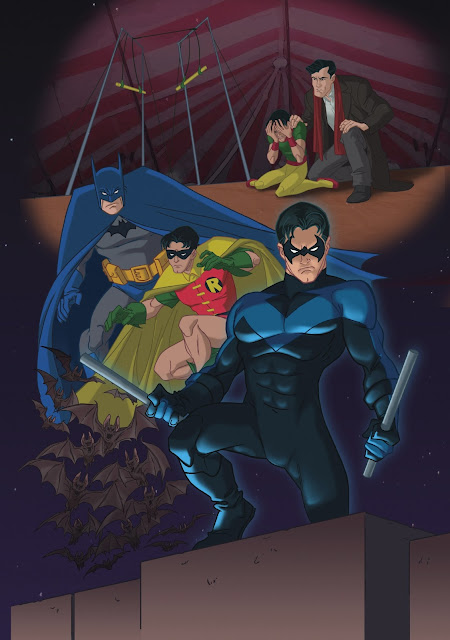 Added: I should mention that I stole the title of this particular post from a song by Allan Sherman. An old recording artist I highly recommend if you enjoy song parodies...and Jewish humor.

First up this year in addition to the other Graphic Novels I'm working on (ERB's The Eternal Savage and the Curse of the Werewolf of Paris) I'll also be working on an additional soon-to-be-announced secret project with many other artists for Sequential Pulp/Dark Horse Comics and written by Martin Powell.
Here's a couple of teasers I did for it: 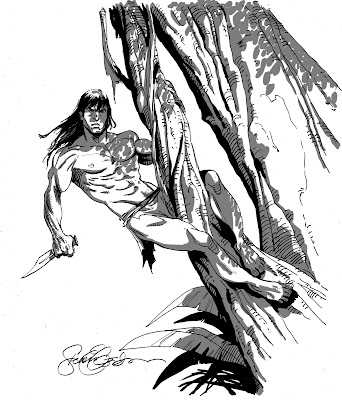 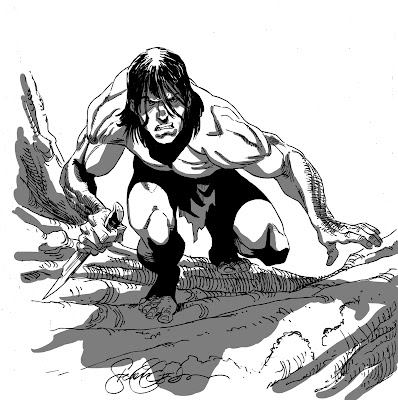 Now to bring you all up to date, I'm currently I'm still working on NFL's Rush Zone (on NickToons) and waiting for the next season to start.
I'm also working on a couple of kids books for HarperCollins featuring DC characters and I'm planning a new sketchbook or two. My original two (Expressions & Attitudes 1 and 2) sold out and the only one I have available is the The Art of Steven E Gordon that you can purchase at the CTNX marketplace for $11.95.
I think one of the new sketchbooks will be a compilation of the first 2 sketchbooks for those of you that missed them as well as adding some new material. I also might create a sketchbook that includes mostly my convention sketches.
I'm also thinking about self-publishing a children's book, that my wife helped me create, that is pretty independent of anything else I've done.

Needless to say this should be a pretty busy year for me....