...I'm almost on time with my Fan Request Friday choice  - in fact, you could say I'm early!

have been requested quite a few times over the last few months (and not always by the same person!), so I thought it was time to give these kissing cousins a try.
I'm starting to put together another sketchbook so this, and many of the other requests, should find a place in it. It's going to be published by the fine folks at House of Secrets - as soon as I can dig through all my folders and find enough drawings. I'll keep you informed when it's available for sale.

...and almost carefree. Or, at least, that's how I feel in comparison to the last month or so now that I've put to bed two Green lantern movie adaptations for GrossettDunlap. Because of the movie release date the deadlines were really tight and it left for very little breathing room. Especially since I had many other obligations for work that I also couldn't drop the ball on.
I'm also going to use this as my excuse for why I was, for two weeks in a row late (okay, a complete no show) with my picks for Fan Request Friday. That's my story and I'm sticking to it.

The next choice has been suggested on and off for awhile and much more consistently lately  - probably due to its second season premiere. I started watching Archer

when it first came on and I really enjoy the writing and sensibility of the whole show. If you haven't seen it I highly recommend checking it out. You can click on the link above and it will take you to Amazon where you can buy season 1 or just check it out on TV when you get a chance.

This last piece I've been sitting on for awhile because it was a commissioned piece for someone's birthday and i didn't want to accidentally spoil it by posting it too early. The birthday girl has received it and I'm no longer worried about that. Here is many an X-Men fan's fantasy: Wolverine and Rogue getting married. I was asked to use the Wolverine and the X-Men designs and I through 'reality' to the wind and had them kiss... 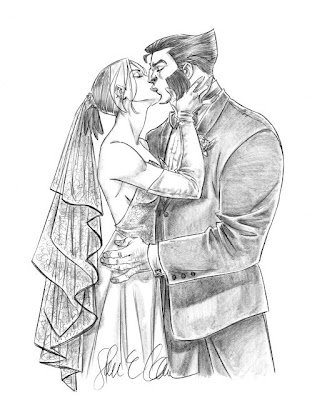 ...just perfect for this week's Fan Request Friday's choice of the Horned King. He's been requested several times and I finally thought it might be time to go ahead and draw the horny one again. Pretty sure I haven't drawn him since I animated my last scene on the Black Cauldron way back in 1985 or 1984. Back then at Disney they didn't have official Key animators (though everyone knew who they were) and no one received that type of credit until several films later. I understand it was Glen Keane who helped push for that, but that was a long time after I left so it doesn't really effect me much either way. Anyway, I sort of inherited the position of Key animator on the Horned King and ended up animating  most of the character's big scenes (all that were, left that is) including his fight with Taran at the end at 95% of his death scene. Of course at that time we all animated whatever characters were usually in a scene and didn't worry as much about who did what and so I also did all the animation for Taran in that fight as well. Black Cauldron will never be considered a great film, but I had a good time working on it and I'm pretty proud of the work i did on it.
One of these days I'll have to write more about my short time at the big D.

So, remember last week, when I never got around to posting the choices for FRF...? Well, here they are...

The first is Brenda Starr. A head in period clothing - what's not to like?

And the second is Superman - oddly enough, no one's ever requested him before. I've been drawing him so often for the HarperCollins kid's book that I illustrate that I thought it was worth taking a slightly different approach.  I'm not sure if I like it better or not...