I wanted to let anyone living in or visiting the Charlotte, NC area know that my good friend Francesco Francavilla (the artist of The Black Coat and other comics - as well as the master of my web-site and the designer of my sketcbook) will be at the Hero Con June 30 to July 2 - Friday to Sunday of next week selling his sketchbooks - and he'll also have a few of my sketchbooks to sell as well.
Here’s a link: http://www.heroesonline.com/con-indie.htm and here's a link to Francesco's web-site: http://www.francescofrancavilla.com/ . It's well worth a look and you might just become a fan of his. 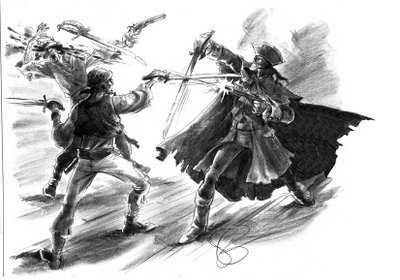 This is a drawing I did awhile ago of The Black Coat. These are really fun comics - they're a kind of a cross between the Scarecrow of Romney Marsh and Batman.
Posted by Unknown at 6:30 AM 1 comment:

A Gathering of Gargoyles...

As promised, Saturday I sat on the panel at the Gargoyle convention, A Gathering of Gargoyles. It went pretty well - although the panel participants almost outnumbered the audience. Well, not quite - but almost. It was intimate and very casual and it was good seeing some my friends Boyd Kirkland, Frank Paur, James Peters and Gary Hartle again. They're all great guys and it was fun catching up with them.
Afterwards I participated in what is called a Mug-A-Guest...I'd never heard of this type of thing before, but it was an even more intimate way to meet with fans and answer some of the questions that wouldn't have been appropriate at the panel.
I had a good time and if asked I'd be glad to participate again.
Posted by Unknown at 6:10 AM No comments:

This Saturday, June 24th, I'll be participating in a panel discussion at the Gargoyles Convention. The panel is "Adapting Stories & Characters from Comics to Film" and starts at 12:30PM. I'll be there with Frank Paur, Boyd Kirkland and a couple of other artists. The panel will be 90 minutes with a 30 minute signing to follow. I'm not sure how much I'll have to contribute, but hopefully I'll won't just sit there like a lump staring at the audience.

I'll also bring along some sketchbooks to sell - of course. 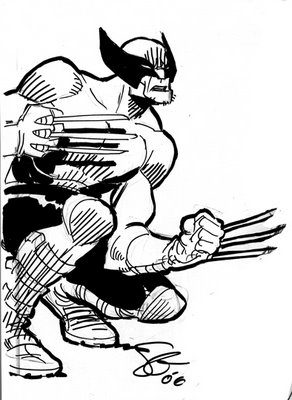 I keep tabs on some of the comic/animation news web-sites and I happened to come across a photo of Jean Grey/Phoenix from X3 and it reminded me of when Boyd and I were doing research for the HarperCollins X3 books. We had to go downtown to Marvel's offices and make sketches from their set and publicity photographs. We weren't allowed to make copies or take photos so we had to sit around for hours sketching and making notes. I guess they were afraid we'd post something on the interent - though it wasn't long before Fox was posting the same images (and better) all over the internet themselves. But not in time for us to incoporate into our books accurately, of course.
Oh well, but that's all beside the point. What caught my attention immediately was their costume for Phoenix. I thought it was an interesting take on her and then I realized it looked kind of familiar. I pointed it out to Boyd and that was the last time I thought of it. Even while watching the movie in the theater.
Until I saw this photo on a web-site. I guess it was the torn pants that reminded me of my initial reaction. It's not a very good photo, but I think you'll get the point. 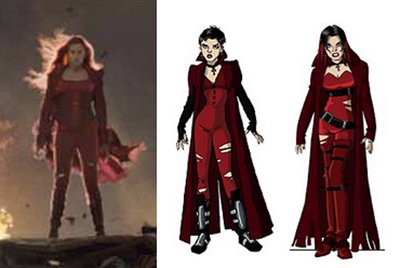 I included images of Wanda as she appeared throughout X-M:E and in the last episode as an adult...I guess I should be flattered that someone working on X3 was a fan.

Also I hope you've also noticed that I moved the link for my SketchBook to the bottom of the web-site and included a little image of the cover to help remind you of what the PayPal button is for. 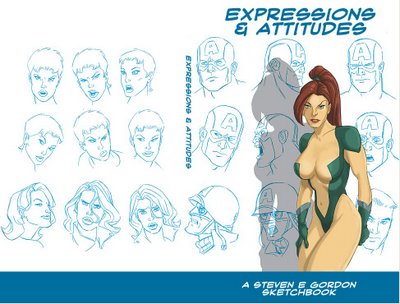 Well, after months of calling and getting told they're working on it and they were just trying to figure it all out and missed self-imposed deadline after self-imposed deadline I finally got an answer and found out that the table I was counting on would not be available. Apparently, even though we applied before the deadline, I was told that only those that applied by mid-January would get tables - and it sounds like some that even applied over a year ago didn't get what they asked for.
Oh, well, I'll just have to try earlier next year. In theory.
This year I'll explore other options, but for now I think I can assume I won't be selling books at SDCC. So if you want one the best way to get it is to go through this web-site. Sorry. Maybe next year...?
Posted by Unknown at 7:04 AM 2 comments:

Wow! I'm so jazzed that there's been such a big response to my little sketchbook - and very surprised. Thanks everyone!
It's a good thing that I have some free time right now so I can spend a little extra time adding a sketch to the back page.
Several people asked about shipping to Canada and I responded to them individually, but I thought it might be a good idea to post the info here as well.
Just add $2 more to the purchase price. But you won't be able to use the quick-click button I set up (I'm only so computer literate), but just go to PayPal directly and e-mail the payment to my e-mail stevegordon@adelphia.net
Here's another little tease for all of you...