Battle of the Artists

Just a quick note - I'm really busy with several storyboard projects right now - I didn't realize that when I answered questions for this interview that this would be the result, but as long as it is I thought I could at least direct some of towards the web-site -- and maybe garner a few votes.

The web-site is called Designer's Depot and is worth a look around even beyond the voting.

If you decide to vote for one of the much better looking artists I'll understand though - thinking of doing that myself.

In the meantime, here's a rough for a commission I'm working on to tide you all over... 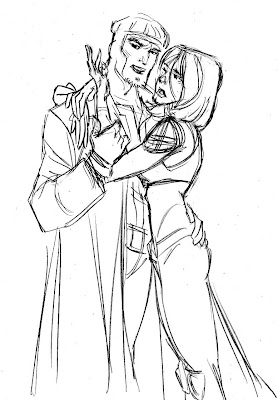 Also thought I'd tease you with a little more about the secret project. It's lookinhg really good and I should have some positive news in a couple of months - or not. Some of you tried guessing and were wrong while some peopel who had no idea who I was have contacted me out of the blue and discovered what I was up to. They went the around the backdoor and were researching the project and discovered I was attached to it.