It's been a couple of busy weeks and I've had little time to post as I planned. I started a new job as one of the directors for Marvel's Wolverine and the X-Men working with my friend Boyd Kirkland who is the new producer of this series. Before you ask this is in no way a continuity with X-Men: Evolution and I will NOT be doing the character designs for this show. But I am doing design work for one of the next Marvel direct-to-videos that I cannot reveal the name of because it hasn't been announced yet. So needless to say I'm pretty busy these days.
I'm also still working at trying to get funding for that special project I mentioned in earlier posts (or alluded to since I really didn't give any specifics about it).
Anyway it seems appropo to continue discussing my work with Ralph Bakshi right after my rant about mo-cap and it's relative merrits. Especially since his use of rotoscope and roto-photo seemed to garner the same nasty reaction from the animation community as the recent use of motion capture seems to be getting. Especailly since I found a lot of this stuff in storage recently. I'll skip over the "Hey, Good Lookin'" and the "American Pop" years for now - especially since I hadn't saved anything of value from those films - and skip right to "Fire and Ice".
In Lord of the Rings the rule was to slavishly follow the live-action except for the animation of the faces which were obviously more broadly designed (by Dale Baer) then the live actors. Then on American Pop the rule was to follow the live-action EVEN in the faces which were mostly designed to look almost exactly like the live-actors (by Louise Zingarelli). I can only recall one design that was a little broader than the actor and this was certainly the exception. I often caught flak during AP because I would often push the acting, but that's another story.
On Fire and Ice we given the freedom to use the roto-scope in a more traditional approach (i.e.: like Dsiney) and change timing, play with poses and only use what worked from the live -action as well as having to create better acting than we were given by the live actors.

These are examples of how we had to change faces and proportions of the live action...(yes, that's Ralph standing in the background behind Darkwolf). 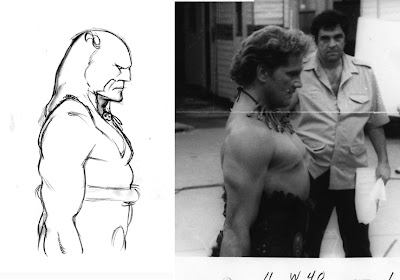 These are some of the construction sheets created to show the animators how to alter the actor into Larn. 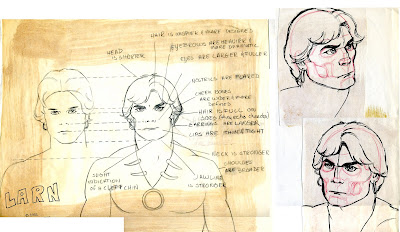 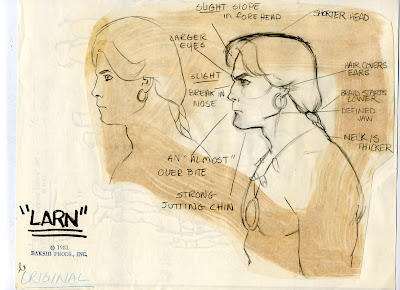 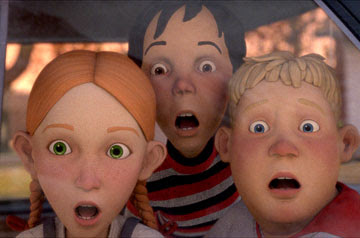 My next post was actually going to discuss more of my past work for Bakshi, but I guess in a way it does sort of connect to what I'm going to blog about instead.
I usually don't get into too much opinion on this blog (which surprises many that know how opinionated I can be) because I usually just use this as a place to connect with fans. But recently I've seen a lot of other bloggers and animation people arguing about the validity of the films that have been nominated for an Academy Award for Best Animated Film.
Just to be clear those films are Cars, Happy Feet, and Monster House.
The cotroversy that I'm talking about (or everyone else is talking aboout) is whether Motion capture animated films should be considered animated films and be able to compete with a non-motion caoture film like Cars.
Originally there were going to be 5 noiminations, but due to the fact that there needs to be 16 qualified and submitted films and the 16th one this year was disquailfied due to not enough animation the amount of nominations dropped down to 3. This controversy may never have reared its head if there were 5 nominations because there would have been a good chance that the other two nominations would have been similiarly animated in the same manner as Cars.

I've already posted on a couple of Blogs comment sections (like the excellent Mayerson on Animation and the Animation Guild's Blog) so I'll crib from my responses on those to start.

As a voting member of the Academy I feel very determined that certain things shouldn't be accepted in many categories. Such as Andy Serkis being given a nomination for Best Supporting Actor for Gollum - at least not without the animators getting honored as well - anymore than Paul Newman should be nomnated for Doc in Cars. In this case I wouldn't think of disqualifying either of these films anymore than I would a film that was completely rotoscoped and hand drawn (such as some of Bakshi's films or Bluth's last couple of films or large chunks of several Disney films). These 2 nominated films still needed animators to work on and as any animator can tell these 2 films weren't strictly motion-captured. Motion capture, when used properly (like both Monster House and Happy Feet - IMO), is just a tool more along the lines of rotoscope was for even Disney on Snow White and too many films since to list. Though if the film had absolutely no animators actually working on it (I don't know if Scanner Darkley falls into this category or not - though it did qualify for nomination according to the board) then in my opinion it probably shouldn't.
I tend to avoid the phrase "slippery slope", but this definitely qualifies as one in my opinion. If these films had been disqualified because they used motion capture as a tool (like rotoscope has been used since Snow White) than do we disqualify poorly animated films? or films animated by subcontracted overseas studios for a small budget? or films that use too much roto-scope? There might need to be a line drawn, but this isn't where it should be.

Well, that's my 2 cents. Next post I'll get more on track and show some Fire and Ice rotos and how we traced them and really didn't animate that film...
Posted by Unknown at 10:06 AM 2 comments:

Don't ask questions...just mark your calenders and do what you need to do (you can also click the banner to find out more).

Posted by Unknown at 9:55 PM No comments:

Something from the past...

Happy New Year everyone... a little late , but still well-intentioned.

Recently I needed to clean out some stuff from my storage unit (how many boxes of unused VHS videos does one person need to store?) and decided to also go through some of my old wprk boxes. I found some stuff that I think some of you might find interesting. At least I found it interesting.

Here's a Roto-scope frame from the first film I ever worked on - Ralph Bakshi's Lord of the Rings. If I recall right this scene was never used, but I thought it was a great shot that showed some of the main characters and the actors that mimed their parts. Just like in regular animation the voices were recorded by actors (including John Hurt as Aragorn) and then the 'roto-actors' would act/pantomime to the recorded voices that were played back for them. It sounds awkward, but worked remarkably well. 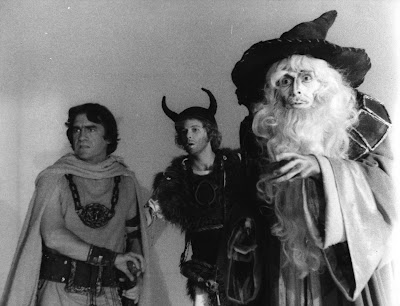 Underneath is a drawing I did myself many years ago of Aragorn, Boromir and Gandalf based on this roto. This was probably towards the end of production and I'd been animating (sort of) for awhile. It doesn't look too bad considering how little I knew at the time... 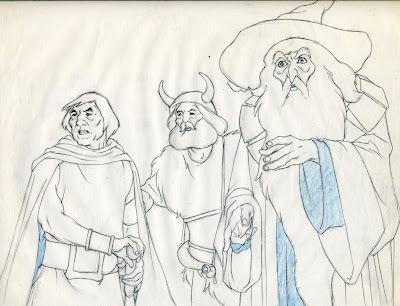